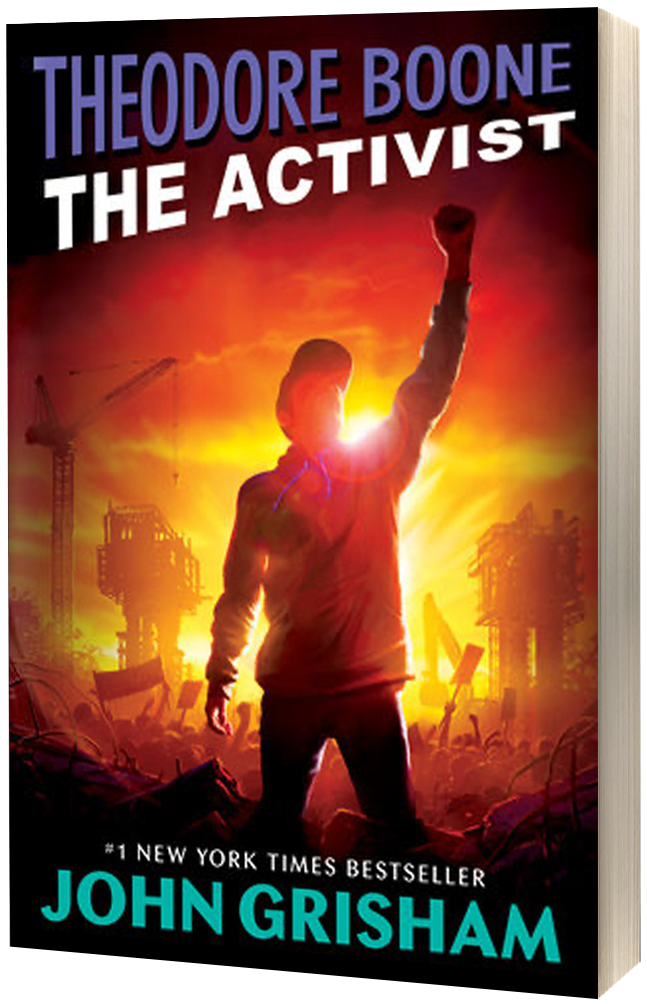 Theodore Boone is back in action! As all of Strattenburg sits divided over a hot political and environmental issue, Theo finds himself right in the thick of it. The county commission is fighting hard to change the landscape of the town, and Theo is strongly opposed to the plans. But when he uncovers corruption beneath the surface, no one—not even Theo—is prepared for the risks—and potential harm—at stake. Torn between his conscience and the law, Theo will do whatever it takes to stand up for what is right.

The opponent was the team from Central, the “other” school in town and the great rival of Strattenburg Middle School. Whenever there was a game or a match or contest of any sort against Central, the tensions were higher, the crowds were bigger, and things just seemed more important. This was true even for a debate. One month earlier, the SMS Eighth-Grade Debate Team had won at Central in a packed auditorium, and when the decision was announced by the judges the crowd was not happy. There were a few boos, though these were quickly hushed. Good behavior and sportsmanship were expected, regardless of the contest.

Strattenburg’s captain was Theodore Boone, who was also the anchor, the closer, the go-to guy when the pressure was on. Theo and his team had never lost, though they were not quite undefeated. Two months earlier, they had tied with the SMS girls’ team after a rowdy debate on the issue of raising the driving age from sixteen to eighteen.

But Theo wasn’t thinking about other debates at the moment. He was onstage, seated at a folding table. Aaron on one side and Joey on the other, all three young men in coats and ties and looking quite snappy, and all three staring across the stage at the team from Central. Mr. Mount, Theo’s adviser, friend, and debate coach, was speaking into a microphone and saying, “And now, the final statement by Strattenburg, from Theodore Boone.”

Theo glanced at the crowd. His father was sitting in the front row. His mother, a busy divorce lawyer, was tied up in court and upset that she was missing her only child in action. Behind Mr. Boone was a row of girls, including April Finnemore, one of Theo’s closest friends, and Hallie Kershaw, the most popular girl in the entire eighth grade. Grouped behind the girls were a bunch of teachers: Madame Monique, from Cameroon, who taught Spanish and was Theo’s second favorite, after Mr. Mount, of course; and Mrs. Garman, who taught Geometry; and Mrs. Everly, who taught English. Even Mrs. Gladwell, the principal, was there. All in all a nice crowd, for a debate anyway. For a basketball or football game, there would have been twice as many spectators, but then those teams had more than three contestants per side, and, frankly, were more exciting to watch.

Theo tried not to consider these things, though it was difficult. An asthma condition prohibited him from participating in organized sports, so this was his chance to compete before spectators. He loved the fact that most of his classmates were terrified of speaking in public, while he enjoyed the challenge. Justin could dribble a basketball between his legs and hit three-pointers all day long, but when called on in class he was as timid as a four-year-old. Brian was the fastest thirteen-year-old swimmer in Strattenburg, and he enjoyed the confident swagger of a great athlete, but put him in front of a crowd and he wilted.

Not Theo. Theo spent little time in the bleachers cheering for the other kids; instead, he hung around courtrooms and watched lawyers battle before juries and judges. He would be a great lawyer one day, and though he was only thirteen, he had already learned the valuable lesson that speaking in public was important to success. It wasn’t easy. In fact, as Theo stood and walked business-like to the podium, he felt his stomach flip and his heart race. He had read stories of great athletes and their pregame routines, and how many of them were so tense and edgy they would actually vomit. Theo did not feel sick to his stomach, but he felt the fear, the unease. A veteran trial lawyer had once told him: “If you’re not nervous, son, then something is wrong.”

Theo was certainly nervous, but he knew from experience it was only temporary. Once the game started, the butterflies disappeared. He touched the microphone, looked at the moderator, and said, “Thank you, Mr. Mount.” He turned to the Central team, cleared his throat, reminded himself once again to speak clearly and slowly, and began, “Now, Mr. Bledsoe makes some valid points, especially when he argues that someone who breaks the law should not benefit from it. And that many American students who were born here and whose parents were born here cannot afford college. These arguments cannot be ignored.”

Theo took a breath, then turned his attention to the spectators, though he avoided eye contact. He had learned a few tricks during his career in debate, and one of the most important was to ignore the faces in the crowd. They could be distracting. They could make you lose your train of thought. Instead, Theo looked at objects when he spoke—an empty seat on the right side, a clock in the back of the room, a window on the left side—and as he spoke he continually shifted his gaze from one to the other. This gave the clear impression that Theo was tuned in to the crowd, looking earnestly, communicating. It made him seem comfortable at the podium, something the judges always liked.

He continued: “However, children of undocumented workers—we used to call them illegal immigrants—have no choice where they are born, nor can they choose where they live. Their parents made the decision to enter, illegally, the United States, and they did so primarily because they were hungry and looking for a job. It’s not fair to punish the children for what their parents did. We have students in this school, and at Central, and at every school in this district, who are not supposed to be here because their parents broke the law. But, we admit them, accept them, and our system educates them. In many cases, they are our friends.”

The issue was red-hot. There was a noisy movement sweeping across the state to prohibit the children of undocumented workers from enrolling in public colleges. Those who supported the ban argued that the large number of “illegals” would (1) swamp the university system; and (2) squeeze out American students who might otherwise barely qualify for college; and (3) consume millions in tax dollars paid in by real US citizens. The Central team had done a good job making these points so far in the debate.

Theo went on, “The law requires this school system, and every school system in this state, to accept and educate all students, regardless of where they come from. If the state has to pay for the first twelve years, why then should the state be allowed to slam the doors when these students are ready for college?”

Theo had some notes scribbled on a sheet of paper in front of him on the podium, but he refused to look down. Judges loved debaters who spoke without looking down, and Theo knew he was earning points. All three of the boys from Central had relied on their notes.

He raised a finger and said, “First, it’s a question of fairness. All of us have been told by our parents that they expect us to go to college. It’s part of the American dream. It seems unfair, then, to pass a law that will prohibit many of our students, and many of our friends, from being admitted to college.” He raised another finger. “Second, competition is always good. Mr. Bledsoe takes the position that US citizens should be given priority in college admissions because their parents were here first, even though some of these students are not as qualified as the children of undocumented workers. Shouldn’t our colleges admit the best students, period? Across this state, each year there are about thirty thousand openings for incoming freshmen. Why should anyone get special consideration? If our colleges admit the best students, doesn’t that make our colleges stronger? Of course it does. No one should be admitted unless he or she deserves it, just as no one should be denied based on where his or her parents were born.”

Mr. Mount worked hard to suppress a grin. Theo was on a roll and he knew it. He managed to add just a trace of anger to his voice, nothing too dramatic, but the right touch that conveyed the message—This is so obvious, how can anyone argue with me? Mr. Mount had seen this before. Theo was moving in for the kill. 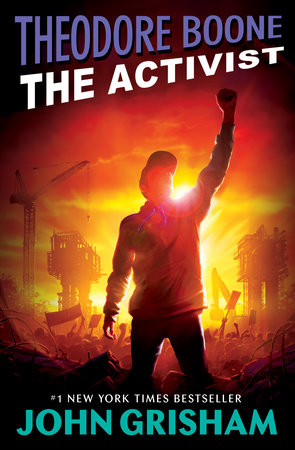